The concept „CIRKEL“ works as a design guideline, a high-quality construction kit for the actual producers. An existing structure of craftsmen is used to adapt a product individually to the customer, who becomes the designer within this principle. On a website one sets colour, form and material of the shoe. The locally and sustainably produced components are then sent to the nearest cobbler, who assembles them into a perfectly fitting, long-lasting everyday shoe. Thus regional markets are served and individual shoes are being produced in decentralized workshops. Hereafter the work process can be seen.
THE PROBLEM
The average Person in the western world bought seven pairs of shoes in 2019. Because of their construction—usually many components are stitched, glued and molded together in complicated ways—they’re almost impossible to recycle and most of them end up in landfills. Worldwide, more than 24 billion pairs of shoes were made in 2019, 47 percent being Sneakers. 73 percent of all shoes are manufactured in Asia, the long transport route is another reason for the poor carbon footprint of sneakers. The working conditions under which production takes place in Asia are inhumane and poorly paid. Even today, despite so many steps being taken over by machines, the production is still incredibly labour-intensive. Almost 300 steps are necessary to produce a sneaker.

THE SOLUTION
CIRKEL is a low-complex, sustainable sneaker concept. A construction, that allows glueless assembly, which makes it easy to repair and replace parts. The customer individually imagines form, colour and materiality of the shoe on a website. The components can be produced locally worldwide and be shipped in an A4 envelope to the shoemaker nearest to the customer. Afterwards the components are adapted perfectly to the foot of the customer- if desired details are added. The user can return to his personal cobbler at any time to repair, replace or adapt the shoe to trends. 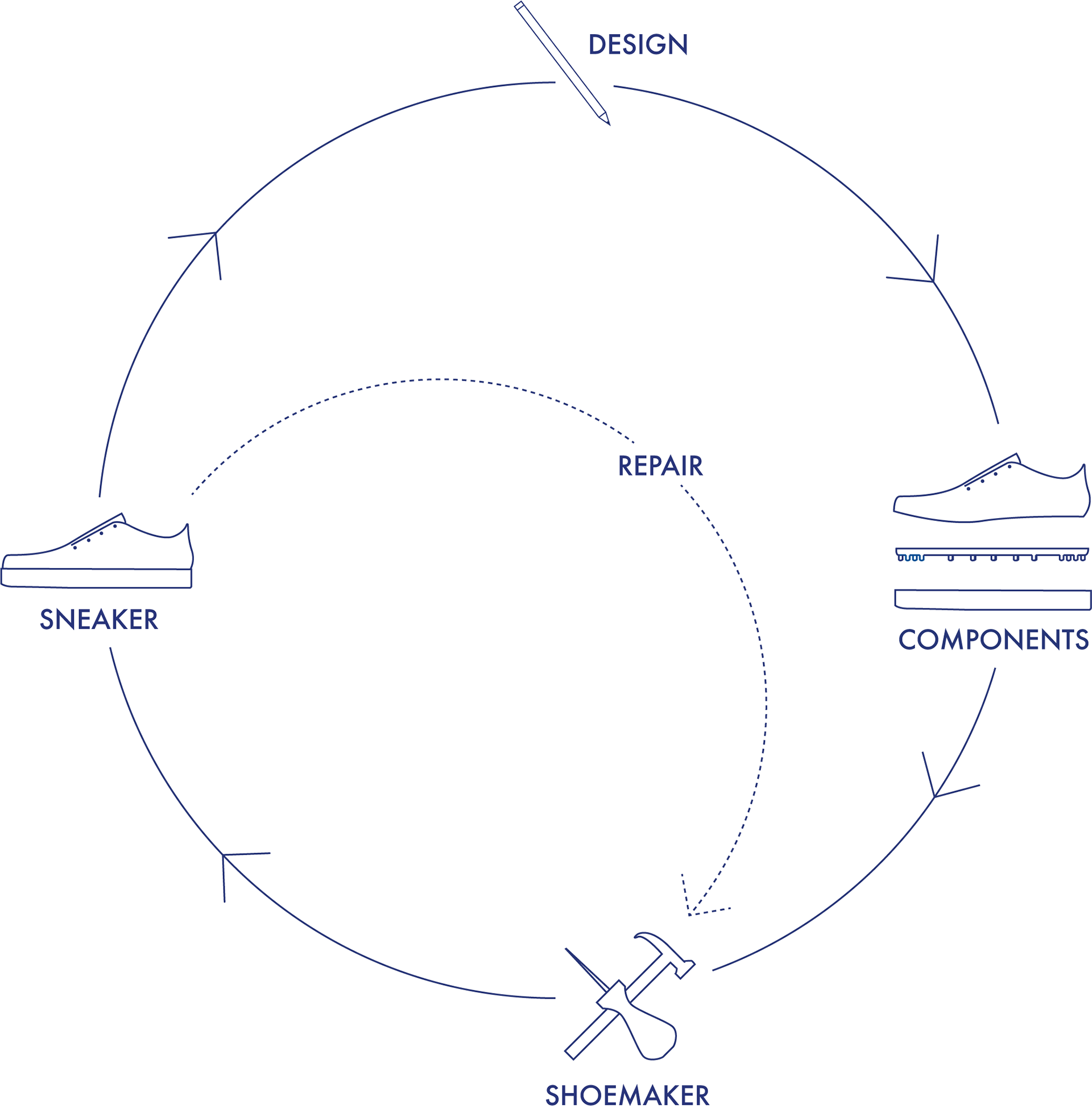 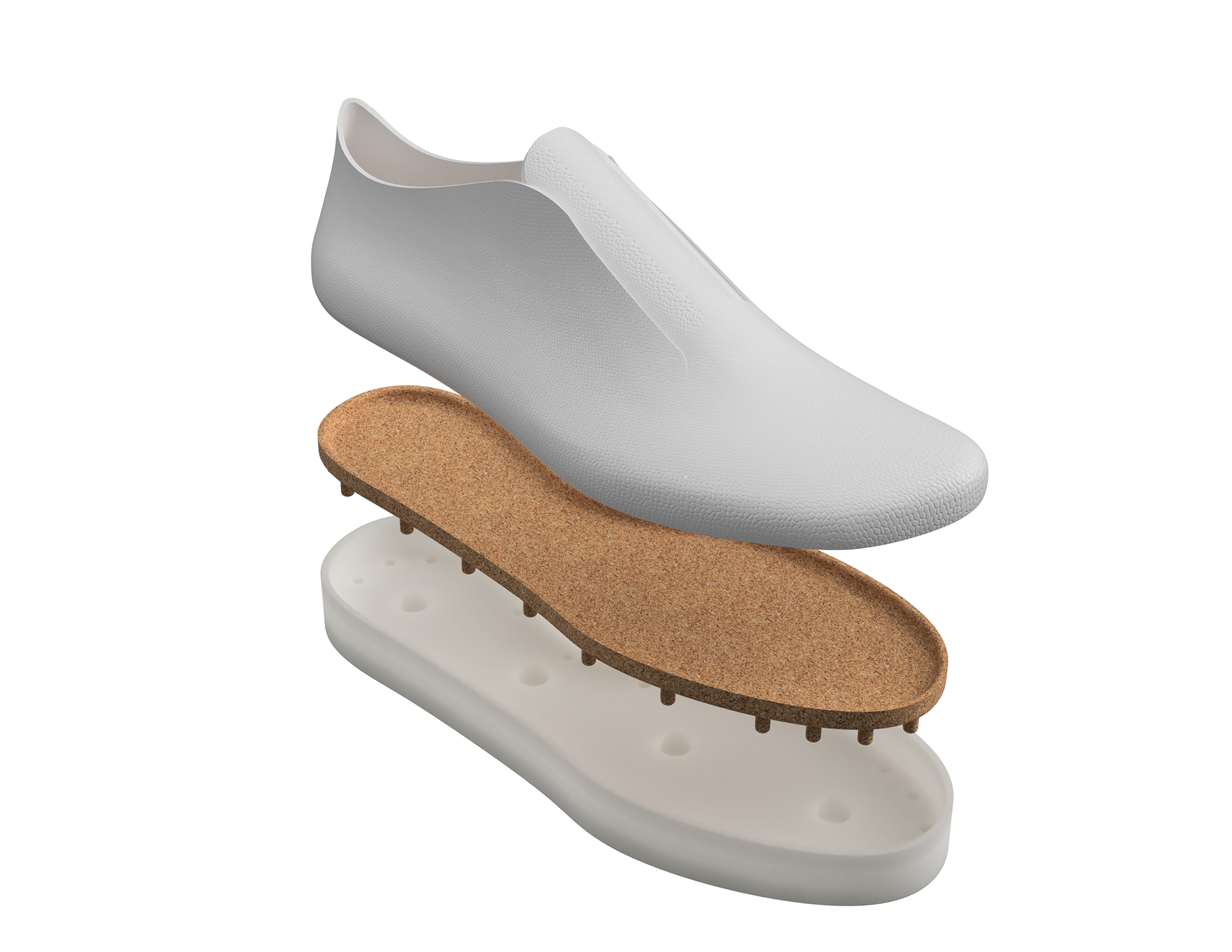 DESIGNING THE SHOE
The shaft is put on the "nubs" of the cork insole. Afterwards the upper part of the sneaker is put into the outsole. The properties of the cork to extend prove to be helpful here. The two parts of the sole wedge together. Then the upper and outsole are sewn together at the side. The shoe consists of five parts and hold together with just two seams and no glue.

Cirkel is intended to give consumers an understanding of the value or the desire for regional and handcrafted products. This is exemplified by a new low-complexity, modular construction method and new distribution channels. The aim is to convey the value of handcrafted products to the consumer. To build an understanding that behind every good produced there is a lot of work and therefore a special value.

„[...] the power for change lies in the hands of the consumer - given he has a choice -  and the power to shape this new consumer mindset lies in the hands of the creative industries. „
While the socially accepted role of a designer used to be to create products that were supposed to make people's lives more pleasant or aesthetically satisfying, today it is much more about shaping people's consciousness. It is important to understand that the human being is part of a Whole and is not above things. We must learn to integrate ourselves into the environment instead of destroying it. In my opinion, the task of the product designer is not always to awaken new needs, but to question existing products and their surrounding system and integrate them into a cycle.
NEXT PROJECT
↑Back to Top